Hypeman (or woman): The Snowboarder’s (or Skier’s) Best Friend

This is one of those things to teach but it has nothing to do with your personal, technical progression. Actually it kind of does, but not in the way you’d expect.
This is one of the most underrated, under-the-radar personalities in your snowboarding/ski runs that actually adds a lot of value to you and your crew: it could be in terms of fun, and progression, and of skill. Apart from that, trust it’s just more fun to have a hypeman 😀 so what is a Hypeman?

What is a Hypeman?

Well, people normally know them as this but that’s not what we’re going after. In snowboarding (or ski, just assume that I’m interchanging it at this point, or maybe this doesn’t exist in skiing? I’m not sure) this is the person, your person who hypes you (ofc), but not just pointlessly hyping you. S/he’s the person that pushes you, makes you progress in terms of your skills, capabilities, or even just plain experiences.

It’s not a hardline definition or “job title” wherein there’s only one hypeman at a time. You can have multiple. If anything it’s more of a description and personality, rather than a “role” to fulfill.

I really am just a fan of Mufasa so I had to interrupt.

This person is pushing you to improve and progress. S/he is most likely fun and energetic. They can be excited and rave-y like the hypeman above. They excite you. They motivate you.

The hypeman-ness of someone is extremely evident when you go with a buddy or two in terrain parks (the section of ski resorts with pipes, boxes, ramps/jumps). Terrain parks offer challenges every time and hypemen(?) plan with you, strategize with you on how to attack a feature. He or she feels your confidence level and sees where you are at (mentally). The hypeman knows how to motivate you, and it actually makes you want to accomplish something, not scare you to doing something you don’t want/need to do.

This is even before getting the “excited personality” version. Once he figures out that you’re comfortable or you’re making steps into any progression, he then becomes “more fun”. This person may be exciting and hyping you up while you’re on the lift. A good hypeman is also someone who doesn’t mind doing multiple times in the same run with you for the sake of (your) progression. In the same way it’s just good manners and practice to return that favour later on.

Me Being a Hypeman for Someone Else

Overall, he can be the #goodvibesonly type of guy. Admittedly, I am a hypeman especially when I’m driving with someone. I actually do this even if I’m driving by myself. If I’m with someone, I usually take around 1h40m – 2h to get to Blue Mountain or Mount St Louis and in that time I actually get myself excited natural (because I love snowboarding very much 🙂 ) and everytime I verbalize, giggle, and shout as we get closer and closer I get my passengers hyped a well! I talk to them about what I’d want to do and what I’m challenging myself to do that day. Most of the time they set their own goals too without me pushing them to. It just naturally happens!

With me, the energy is sustained. When I’m driving, I’m HYPED. When we’re parking, even more so. When we’re going up the lift I am BURSTING!

If I’m going out at the (terrain) park with some buddies, I definitely support them in their endeavours. If they say they want to hit a rail, or a larger-than-usual feature, I def go with them! There’s a lot of “WOOO!”, “YOU CAN DO ITTT”, lots of high fives and celebrations when I see them at the bottom of the run. Sometimes I’m like that guy in the vid, sometimes just the normal amount. If they botch a run, you wanna make sure they’re safe first and then provide helpful information / constructive feedback so they can hit it again and ace it the next time!

Sometimes you don’t even have to be someone’s friend to be a hypeman. When you see someone contemplating and planning a feature, I sometimes just start a small talk with them, know what they’re trying to hit and then talk them out and motivate them to ace that shi~.

Another best moment is when you see people lining up, about to do something. It doesn’t have to be a HUGE feature, but something relatively big and new for them. One time I was on the lift, just sitting and chilling and waiting, while you’re up there, you can see 2-3 guys just at the top of a jump, just planning and they’re about to drop. One guy goes down, takes that big enough of a jump and aced it! His friends above were cheering him, some guys below too, and even the seat on the lift that saw his jump were cheering him too!!

Someone Else Being a Hypeman for Me

Many times when I’m going to our local terrain park, I usually go with one of my great guy friends. He never fails to encourage me to do better and we’re always bantering and chuckling and laughing at stupid shit, especially when we’re on the lift. When we’re at the park, he aaaalways encourages me to hit the jumps I like. He’s always happy for me and we always work on each other’s personal goals. Sometimes we would both try something new for the both of us and I’d be like: “Oh god, I think I’m just gonna Jerry (/bomb) that, but what the heck whatever. SEND IIIITTTTT!” and then we’d go, verbally and loudly hyping each other. We’d fuck it up, but it was a fun fuck-up, like this:

I’ve had someone motivate and invited me to hit glades/trees (they’re challenging since you’re constantly dodging trees). Never done it before but he was being fun about it, and I knew he wouldn’t take me to dicey situations that would cause problems. I tried it, had one of the best times in my life in Whistler, and damn…yea! more!

I also have a bunch of peeps that after celebrating something during lunch, they’d be like, yea let’s try this run! and we’d all do it and it’d be funny and challenging sometimes but I always just come out with smiles every time that happens!

Oh an speaking of, most of my examples are when making snowboard tricks but this is applicable any where. I remember when I was starting, I’d be just humble about it and when I talk to friends / ppl up the lift, I just tell them “Oh I’m just here for the green trail (easiest)”, some would say “Yea I saw how you were doing, I think you’re good to go for blue trails (intermediate)” and then some of my friends would go with me, on my own, slow pace and assist me in doing new things for myself! It’s just a great, constructive, and educational environment!

Being a Hypeman Off the Slopes

One can also be a hypeman off the slopes, for example like during après-ski. What is après-ski? Here.

You can hype your friends, or everyone in general, like this!

You can also be a hypeman and a Jerry at the same time:

This one I truly, genuinely appreciate with the snowboard community. It can be a competitive sport but very rarely is there crab mentality going on (e.g.: pulling others down or wishing them bad luck so that you can get ahead).

I really really appreciate this in the community because it’s just a perpetual notion of “pushing each other up”. I entered the sport as a noob during my mid-20s but nobody gave me shit or shamed me. In fact, there were considerable amount of people who are more than willing to help me! It’s just so genuine and I am very thankful with how this works. In turn I try to be the same type of person for other people.

This is very evident in professional snowboarding (Think Olympics, Burton US Open, X-Games, etc). By nature it’s competitive. You want to be at the top, you want the gold. But when someone way better than you walks in, or not even! When someone is attempting something new, there’s this unspoken respect and cheering that happens. You want that person to succeed and pull it off, even if you’re a contestant. You can see this here:

See the guys celebrating, hugging, cheering him on at the bottom. They have bibs right? They’re contestants but they’re genuinely happy for him! There’s an environment of support and encouragement even though they got swept (He won gold, he came from behind not even in the Top three). This is the usual occurrence in snowboard competitions. I’d like to think it’s mostly like this in the snowboarding community.

What a Hypeman is NOT 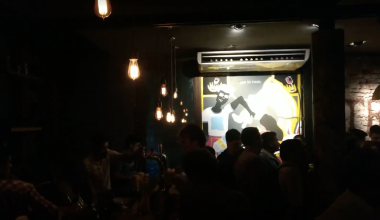